Peaks and Troughs; Strikes and Gutters. 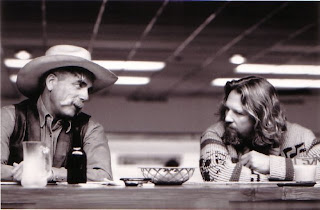 Some days you eat the bear, and some days...he eats you.
Achievement and progress in BJJ and Judo are very cyclical. At least, it certainly seems this way. I remember in November, for instance, I felt like I was riding up a peak in BJJ, and just turning out of a trough in Judo.

Judo, right out of the gates was an experience where I walked away with a lot every time I went.

With Judo, I had a few things going for me when I started. I already had a sense of...I dunno... “fight intelligence” I would call it. I could tell when I was being forced into a bad situation, and when I was being baited. I also had good balance and timing from BJJ. Furthermore, I had a certain aggressive nature that I don’t think other people who are new to Judo carry into it. I was just plain unafraid of the throw. I (mostly) knew how to fall, and was able to fight standing without being overly defensive. I also understood the stagnation that is involved in not being able to take risks. I also had enough stamina and determination to fight, fall and get back up.

Things were great off the top. I learned tons. I developed a few (non-spectacular) throws I could get on the high belts if they got careless. Scoring these was a great confidence builder. I was picking up the technique fast.

The highlight of this period was when we had a regional practice, with a bunch of schools from all over the NCR (National Capital Region.) I worked with this green belt from another school in Randori (sparring.) I deeply value training with unfamiliar partners, so I wanted to make the most out of it. I was very happy with my performance. We both went at it hard. I managed to get a few throws that I had had limited success with in the past. It felt good to perform well, as it should.

Judo was also rough sailing at times. For about a month it seemed that throws that I used to have success with during randori didn’t work as well anymore, if they worked at all. This could be because of the fact that I train with some fairly accomplished guys. In this situation, they would likely allow the throws when done well by a new person, but defend them once the person has some time on the mats. If this is the case, it’s certainly fair. It may also just be a case of people becoming familiar with my “Game” standing. If I even have enough game to call it such.

Part of me sincerely doubts that this is the case though. They are probably going as easy as they ever were with me. I say this because some of my favorite throws seem to not even be do-able while we are doing technique. This can be enormously frustrating. A Tai-Otoshi that worked wonders the week previous is all of a sudden some sort of fiasco.

It’s hard to know why this happens. I have my theories though.

I started to turn this around by December, I had a number of good enjoyable classes. I think a lot of it had to do with risk aversion. I said above that I am aware of how an aversion to risk stagnates learning (you gotta take chances.) It’s all understood intellectually. Expressing that on the mats can be something completely different. The last night I was able to train Judo, I did a good job of it. I took risks, stepped in for the throws, made some and was countered nicely other times. That’s perfect.

As far as improving the technique portion of Judo. I’ve just got to think less. Your body has to think. Your brain has to shut up.

About the same time my frustrations with Judo were going on, a whole new level of...what do we say when we feel good about our game, but not with hubris?...confidence? Sure...a whole new level of confidence was developing with BJJ. Win or lose, I felt that regardless of the position and the actions of my adversary, I either had a response, or could think my way into one. What a good feeling.

This is a transitory feeling though. This I know. I will treasure the perspective that the next trough brings. You can make it into a bad/ego thing, or it can be your call-to-arms.
Posted by CalfOfWar at 8:25 PM